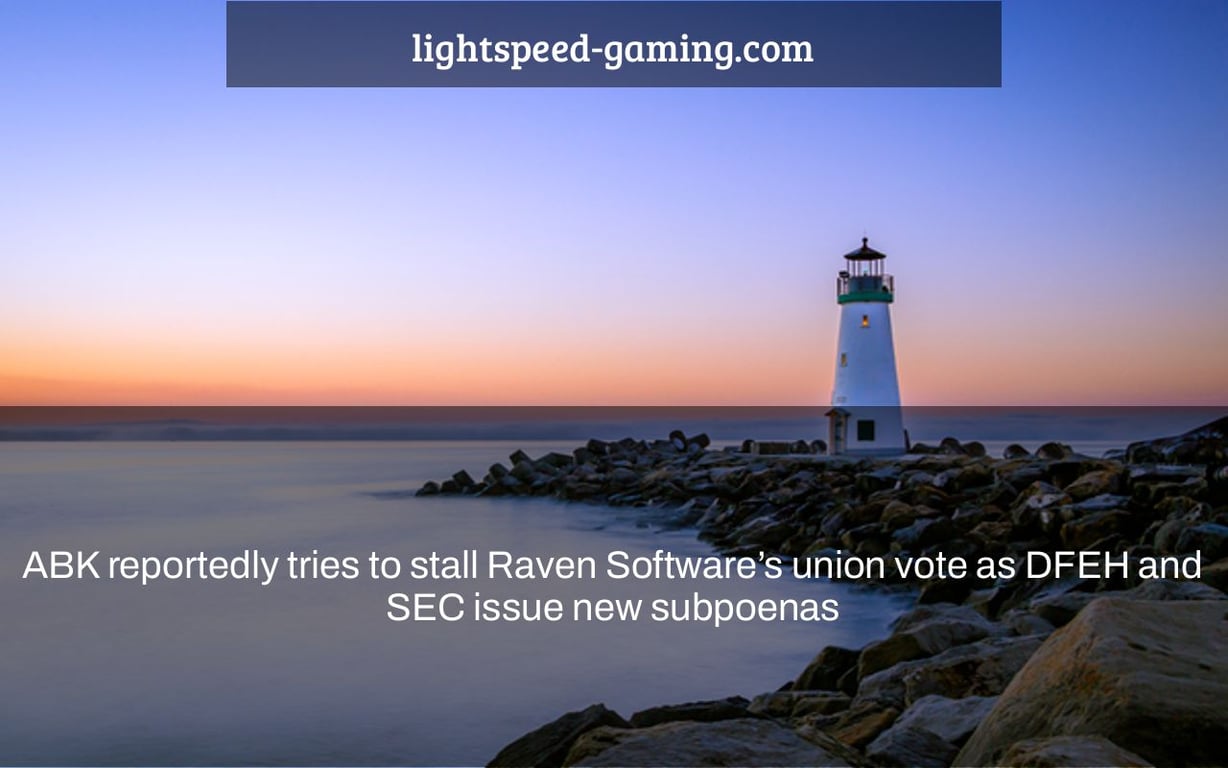 In an interesting turn of events, the DFEH and SEC have reportedly issued subpoenas for ABK Gaming in connection with Raven Software’s union vote. The company has been caught up in a lawsuit from its former employees that alleges it illegally withheld wages. This is turning into quite the eventful day as we head towards February 24th!

The process for Raven Software forming its Game Workers Alliance union was likely always going to be messy, but the burst sewage pipe of Activision Blizzard’s behavior has been something to grimly behold. Readers will recall that QA workers for the Call of Duty developer were heading to the NLRB to formalize their union with a supermajority vote. ABK responded by hurriedly restructuring union supporting QA workers and sending out union-busting internal emails, all while issuing a statement that says the company “deeply respects” workers’ right to organize.

According to a statement from the CWA and the supporting Communications Workers Alliance, ABK management is “using every procedural route possible to delay the vote in an attempt to undermine the workers,” presenting a “exhaustive and dishonest case around Raven QA workers’ job descriptions and day-to-day workflow in order to prevent them from moving forward with their union.”

“It’s past time for Activision Blizzard to acknowledge that we—the employees—have formed a union and aren’t going away.” […] We hope the NLRB does not turn a blind eye to Activision Blizzard’s ongoing efforts to destabilize the Game Workers Alliance (CWA) and permits our union to proceed to a democratic election.”

In unrelated news, the DFEH and the SEC are ratcheting up the pressure on Activision and Bobby Kotick, issuing further subpoenas: The SEC has issued a new subpoena to Activision as part of its investigation into the company’s handling of sexual harassment claims, requesting records and communications dating back to 2016, while the DFEH has issued subpoenas to directors with ties to workplace issues as well as police departments in the Los Angeles area for records relating to Kotick and 18 other current and former Activision employees.

Activision called both agencies’ subpoena requests “extraordinary fishing expeditions,” and issued a statement to Kotaku claiming the requests are “yet another questionable tactic in DFEH’s broader effort to derail AB’s settlement with the EEOC,” and that the DFEH is “impeding meaningful progress at Activision Blizzard and delaying compensation to affected employees.”

Previous articleDecentraland’s promotional rave shows the least energetic online party ever
Next articleMassively Overthinking: Lost Ark and its place in the MMORPG genre