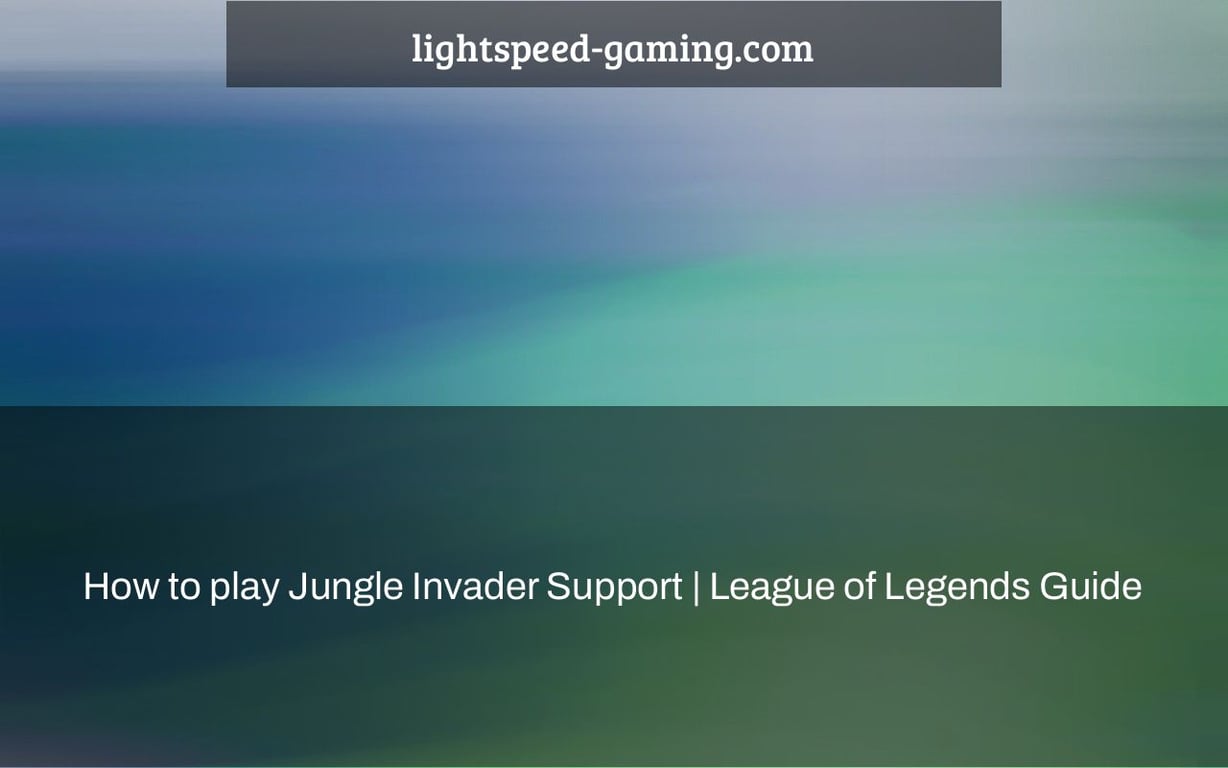 We all know that the support position in League of Legends has never been very popular. This is due to the fact that a support player doesn’t do much damage, preferring to take it or heal it back, which isn’t as exciting as obtaining pentakills and completing goals. However, having such a guy on the squad is still necessary if you want to have a chance to win in the middle and late stages of the game. So, how can you make supporting in League of Legends more enjoyable? By being as obnoxious as possible.

To put it simply, the goal is to track down the opponent jungler, harass them, and steal their farm. It seems to be a good concept at first, but after you consider the potential pitfalls, you’ll soon discover that this is a game for more experienced players. There will be no stopping you if you devote yourself and do it correctly the first time.

Let me start by mentioning that this kind of support in League of Legends isn’t widely used yet, so you won’t see it in many of your matches.

To begin, what do you require?

You’ll need to find an ADC who is willing to go along with this style of support play before you can even get into a game where you can play this manner. People will assume you’re trolling at first since this isn’t yet a trend, so you’ll need someone on the bottom lane who trusts you and won’t ragequit when you vanish into the opposing jungle.

Your Champion is the second most crucial factor. Ranged champions are a lot safer for this kind of strategy, but if you can find a character that can play both jungler and support, you’re great. Malphite, Brand, and Swain are three of the most promising candidates. After you’ve mastered them, you may go to Champions, which is somewhat more harder but also more rewarding.

Oh, and don’t forget about Smite. If you don’t have Smite, don’t attempt to play like this.

So, how do you go about playing as the most obnoxious support ever?

The game begins with you entering the hostile jungle. Alone. Your ADC must stay in their lane, and your jungler must concentrate on their own task; you are not intended to take away their resources or time. The best-case scenario is that you track down the opponent jungler right away and sneakily set a Ward near the camp.

Everyone is doing their job in the photo above, but the support is fully on their own in their attempt to take the Red. They would be able to observe the Red camp’s health in a better scenario, but they make do with what they have. Practice makes a difference in this situation. You can pull this off because you’ve played jungler long enough to have a feel for how long it takes to kill each monster thus early in the game.

The adversary has already noticed the invader and is attempting to keep them at bay, but Nunu, who already has a lot of damage and mobility, can just go up, use Consume and Smite, and be out of there. You don’t want to utilize your Flash at this point, therefore you need something that can simply leave.

You should not return to your own jungle or the bottom lane after this. In an ideal case, the adversary does not pursue you after you cross the river since you will have already crossed it. This is precisely why you want mobility in the early stages of the game.

After that, you’ll have to figure out where the jungler goes. If you were successful in obtaining the buff, you are now the most obnoxious player in the game and on your way to become the most annoying support the opposition team has ever seen. So don’t throw away your advantage.

Follow adversaries and grab their buffs and camps, then use your Wards to find out where they’re going next. You’ll be crossing the middle lane a lot while doing this, which presents an excellent chance for ganks. However, if you perform your job properly and keep the opposing jungler in check, you’ll be able to easily conduct counter ganks as well, not to mention the fact that you’ll be able to give deep vision for your team since you’ll be spending so much time in the enemy jungle.

Unfortunately, everything following this level is situational, and we don’t have a lot of expertise with this kind of support play, so I can’t provide much advice. If you’re familiar with how jungling works, you’ll have no trouble getting the hang of this.

There are a lot of them, so hold on tight. First and foremost, if you are unable to take the first buff – or worse, if you die while attempting to do so – you should abandon this strategy. It will only feed the opponent while also allowing the bottom lane to be pushed in, giving the other team a large amount of money. Unless you want to forfeit the game, you must quit if you fall off in the first few of minutes.

Second, you won’t be able to gain an edge if your ADC can’t play cautious and hold their own for at least fifteen minutes. A poor ADC will merely fuel the opponent bottom lane, causing you to have a disastrous mid and late game. If you see that they are dying often and allowing their turret to be captured, you should either return to playing as a regular support or play with someone else in the next round.

The toughest part will be when the opposition team notices what you’re doing and comes for you. If you aren’t playing in Iron, Bronze, or Silver, the opponent will soon figure out that the best way to stop you is to trap you in their jungle and penalize you for invading so often and efficiently. If you attempt to play like this, this is the fundamental reason why Flash is so vital.

The most challenging component of playing this irritating support style as a normal player, though, is understanding when to return to the ordinary method of playing. It’s fantastic to be powerful and have an edge, but unless you’re the one bearing the load, you should start acting like a true supporter and be available to your teammates.

This kind of support in League of Legends is very hazardous, and players aren’t sure what they’re doing with it just yet. However, it may be a lot of fun, so at the very least, you can attempt to see how far you can go. It might be more entertaining and rewarding for you than the traditional technique of playing support with enough practice.

If you like this guide, be sure to check out our other League of Legends tutorials!

The “best invade junglers 2021” is an article that will help you learn how to play Jungle Invader Support. The article talks about what champions are best for the role and how to do it in a way that is effective.